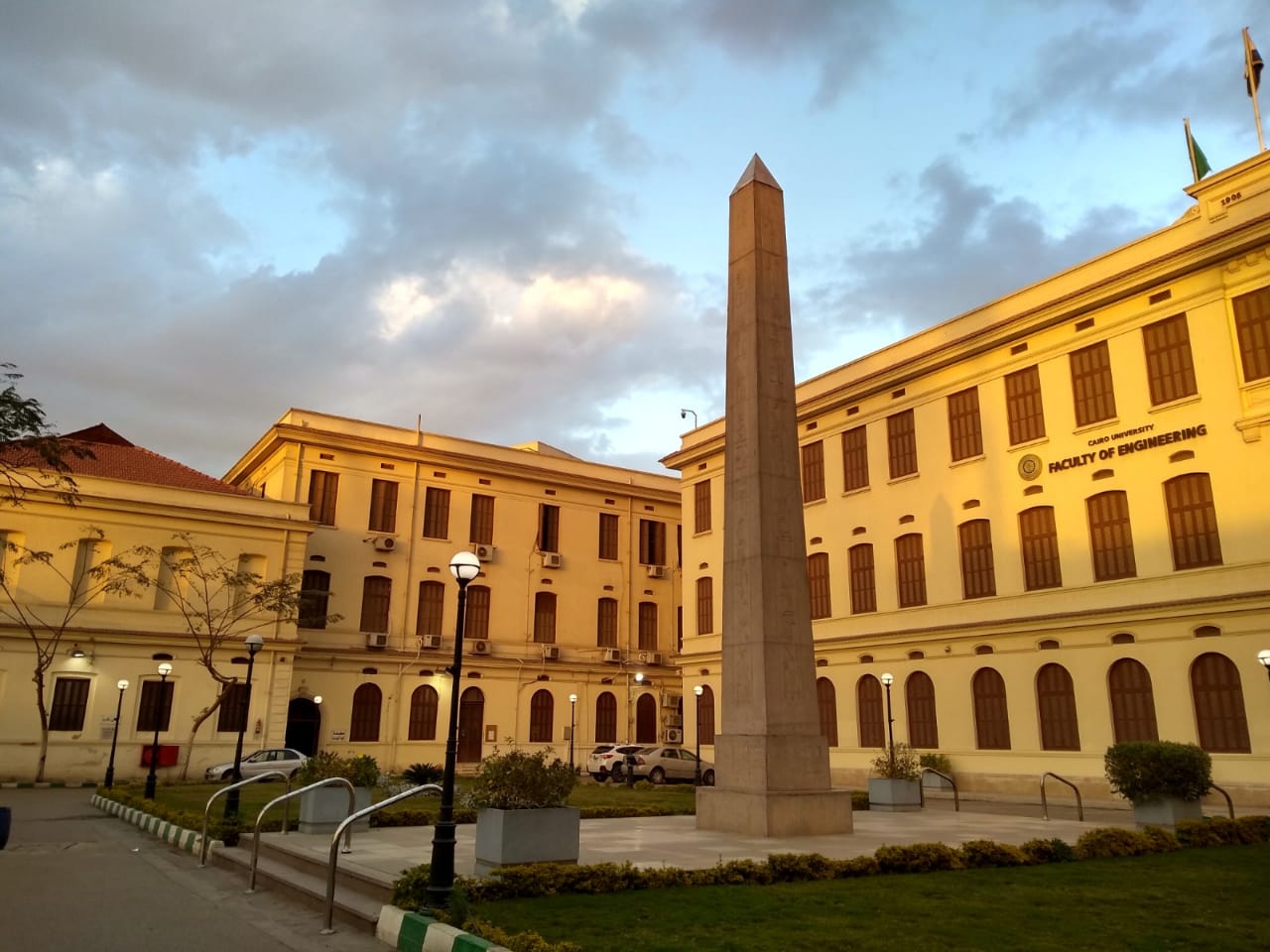 The building envelope has tangible impacts on energy consumption; thus, it is the most effective building layer to apply green retrofits. The decision-making process of selecting retrofit measures to apply is complex, it involves many objectives that are quantifiable and others that cannot be quantified. Retrofit analysis simulation tools can be used to identify some of these objectives such as energy savings and payback period. They are however not enough to rely on during the decision-making process because there are other objectives and variables that must be taken into consideration. Variables that are not easily identified in Cairo/Egypt include the availability of the retrofits in the Egyptian market and the installation process difficulty/duration. The research thus aims to improve the energy efficiency in office buildings constructed in Egypt by applying retrofit measures to the existing building’s envelope. The developed optimized decision-making model for retrofits application in the Egyptian market based on a mathematical framework will support decision makers’ selection based on their objectives. The model is applied to two case studies representing the majority of office buildings in Cairo, to investigate its applicability and compare its results with the results of simulation tools’.

When designing places for people, the first important thing is to know the users to determine their needs and expectations. Therefore, design of outdoor spaces for children requires to know child's psychology such as growth, age, and aesthetics preference and so on. It is necessary to involve their views in the design of these environments to make them attractive. The first impression of the child is very important in his interaction in the space. Thus, aesthetics preferences of softscape settings within the child open spaces were studied as a main responsible factor for the first impression to the space. The purpose of this paper is to introduce a new approach to design children spaces that depends on aesthetics child's preference by the investigation in the relation between sensory aesthetics (softscape variables: number, color, and size, etc.) and other aesthetics aspects (formal and symbolic) to evaluate the aesthetics child's preference in outdoor spaces by considering the psychology of children according to their ages.

Designing a space that is functionally based on the users’ behavior is usually executed according to the architect’s predictions. The aim of this research is to explore how using behavior simulations of the expected users could benefit the design process and be used to evaluate the design proposals. This paper proposes an experiment to test the usage of Agent-Based Modeling and Simulation (ABMS) in the design assessment of the seating arrangement in a food court. The ABMS framework is applied to a model of an existing food court then develops a score during the simulation that determines the turnover rate of clients. A seating design variation that proposes improvements to the original design is tested against the same behavioral simulation for comparison. The simulation of the proposed design showed an increase in the turnover rate by 12%, its score was 250 versus the 224 for the original design. The framework was useful to the assessment of the design proposals although it still needs some technical development for more accurate results.

The advancement in lighting and its related technologies, rapid urbanization expansion, economic growth and misuse of available technologies have inevitably led to light pollution, which has become a global environmental issue. Humans light their nighttime environment for various reasons, including advertising, to facilitate transportation, orientation, and way finding. The aim of this research is double folded; first to evaluate the viewer’s perception of the visual pollution caused by outdoor advertisement and second to assess its associated light pollution. A literature review of recent researches has been performed, analyzed and followed by the application of a survey questionnaire. The questionnaire aimed at identifying the viewer’s perception of the visual and light pollution problems of both Salah Salem Street and Cairo-Suez highway road. The valid responses included 138 respondents representing different genders, age groups and backgrounds. The significance of this research comes from the fact that visual and light pollution resulting from outdoor advertisement is inevitable due to the vast urbanization growth resulting from the governmental mega projects being executed as part of Egypt’s 2030 Vision. The results of this paper can aid decision makers and those involved in setting laws to control visual and light pollution resulting from outdoor advertisement.

The evaluation of the treatment efficiency of four water purification plants in Basrah Governorate was carried out through laboratory tests to assess the effect of the different rivers feeding the plants on the treatment efficiency. Some physical and chemical properties were measured. The results showed that the quality and efficiency of the treated water was very low and unacceptable at the four plants. The results proved that the treated water samples of the plants are unsuitable for drinking. They also demonstrated that the imbalance in the low efficiency of the treatment was not only in the inability of the plants to treat dissolved salts in water, but there was also a significant deficiency in the plants ability to remove impurities and suspended substances, which is the core of the work and tasks of treatment plants. The discharge rates and salts concentrations over the last ten years feeding the Shatt al-Arab river were insufficient to contribute to a positive change in the water quality. A more sophisticated technique of water purification should be adopted, namely desalination in all plants of Basrah. This desalination technology should complement the treatment process after the purification process.

Old industrial structures built with compact elements are subject to function changes and require strengthening while under load. A beam panel is analyzed, which under the ultimate load suffers from extensive yield strain at different locations. The study presents a simplified approach to strengthen beams, which have no indications on weak locations, as a “General Basic” procedure. The upper flange is assumed carrying a distributed load, in addition to a negative moment at the support. The strengthening process is based on attaching the minimum combination of different plates at the determined suitable locations. A parameter study gives the strengthening position of each plate and its reasonable extent by using minimum material and welding energy. The proposed procedure describes the crucial effect of the plastic shear on the formation of the plastic moment. Validity is checked by comparing results with previous tests and numerical values. The designer is given a direct method to determine the safe strengthening amount. Simplified formulae are given to estimate the needed material at the required strengthening level. Excessive strengthening is avoided in this method and the expected deflection can be directly predicted. The required precautions and restrictions are given to achieve accurate results for wide scope of application.

In this paper, a new boundary element technique is presented to predict the settlement and stresses of non-homogeneous soil. Unlike the traditional Boundary Element Method (BEM), the innovative part of the presented formulation is that the soil continuum under arbitrary loadings is divided into boundary element sub-regions, where each sub-region can be regarded as a super finite element. Hence, the stiffness matrix of each sub-region is computed. Such stiffness matrices are computed at interface nodes and are assembled and used to calculate the displacements at interfaces. As a post-processing step, each sub-region is solved separately. Due to the geometrical complexity of the problem, a new preprocessing tool is developed to generate all relevant data. Several numerical examples are solved. The presented technique results are in a good agreement with analytical solution, previously published results and the traditional Finite Element Method (FEM) with less computational effort.

Damping modification factor serves in international seismic codes as a transformation factor between the conventional 5%-damped elastic response spectrum and the corresponding spectra with other damping levels. This transformation process is necessary for the design of structures with high damping levels such as seismically isolated buildings. The aim of this paper is to derive expressions for the damping modification factor using the data of local earthquakes in Egypt. The ground motions used in this study included 26 natural accelerograms recorded in Egypt. In addition, 150 artificial accelerograms were generated to be compatible with the response spectra in the Egyptian code. Two separate expressions were derived for the natural and the artificial ground motions. A comparison was done between the two derived expressions and the values of damping modification factor in two international codes as well as those in previous studies. It is noted that the expression deduced using natural accelerograms gives the most conservative values beyond a time period of 2 seconds and for damping ratios higher than 10%. Consequently, the natural earthquakes expression is proposed for upgrading the Egyptian code to include design provisions for seismic isolation.

Sixteen beams were cast and tested to investigate the shear behavior of the reinforced concrete beams under the effect of the steel fibers and the recycled coarse aggregate (RCA). The steel fibers were added to concrete with (0, 0.5 and 1%) volume fractions. The recycled coarse aggregate used were (0, 25, 50 and 100%) replacement ratios by the natural coarse aggregate (NA). Only four beams were casted with shear reinforcement (stirrups φ 6mm @ 167mm) and 1% steel fibers to evaluate their effect on the shear behavior of beams and the remaining beams were without shear reinforcement. The effect of the steel fibers volume fraction, RCA replacement ratio and stirrups on the crack pattern, mode of failure, load-deflection relationship, first cracking load, ultimate load, ductility, stiffness, and energy absorption were discussed and analyzed. The experimental results were verified with the American and the Egyptian code’s provisions in shear as well as with previous studies equations. The results showed that the steel fiber improves the shear behavior of recycled aggregate reinforced concrete beams especially concrete with high RCA replacement ratio.

Epilepsy is a neurological disorder caused by abnormal discharge in the brain. The electroencephalogram plays an important role in monitoring brain activity in epilepsy diagnostic tasks. The EEG recording of epileptic patients shows abnormal activities including inter-ictal, pre-ictal, and ictal activity. Automatic detection of these abnormal activities aids the neurologists rather than using visual scanning. The selection of discriminative features from different EEG activities is the basis of the seizure detection method. Deep learning is introduced as an efficient approach in computer-aided medical diagnosis systems; it learns features automatically. In this paper, a convolutional neural network (CNN) is employed to classify different epileptic seizure stages. We investigate CNN performance with different signal forms. Firstly, we use a time-domain signal input to a 1-D CNN. Next, we use the time-frequency domain in form of spectrogram and scalogram images as input to an 2-D CNN (Alexnet). The experiments are performed on CHB-MIT dataset which contains long time epilepsy recordings for different patients. Experimental results suggest that the scalogram of the EEG signal increased the CNN classification accuracy to 97%. However, the spectrogram images achieved an accuracy of 73%, while the time domain signals achieved the lowest performance with an accuracy of 64%.